Hajj Has Been Cancelled 40 Times Before This

Earlier this year, we experienced a very different, socially-distanced Ramadan. To hear that Hajj was cancelled was hard to accept, and only bearable because we know that it is for the good of the world and the Ummah. 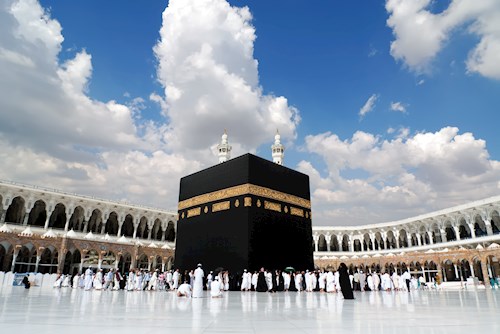 It might seem like this is unprecedented – that Hajj has never happened before, because we’ve never seen our world shut down like this before. But as surprising as it may be, there have been other times in history when Hajj had to be cancelled. Not just 2, 3, or 4 times, but up to 40 times! But by the grace of Allah, our hearts remain united as one Ummah.

Here are some examples of when Hajj was cancelled.

Hajj was cancelled for an estimated 10 years due to Qarmatian attacks on Makkah. The leader of the Qarmatians, Abu Taher Al-Janabi, incorrectly believed that Hajj was a pagan ritual and launched rolling attacks on Makkah and its pilgrimage routes. His people stole the Black Stone and Hajj was suspended for around ten years, and the Black Stone was only recovered in 952, after a ransom was paid by the Abbasids. Some historians report that more than 30,000 people died as a result of this massacre.

A deadly plague hit Makkah in 967 A.D. which ended up killing thousands of people and also led to Hajj being cancelled.

In 1831, a horrific plague from India made its way to Makkah by the pilgrims themselves. Three-fourths of the pilgrims died as a result of the plague and Hajj had to be immediately suspended to prevent future deaths.

In the space of two decades, Hajj was cancelled for a total of seven years, pilgrims could not go to Makkah. In 1837, Makkah was hit by another plague and Hajj was cancelled for three years. In 1846, Makkah was hit by a cholera outbreak that persisted until 1850, which killed more than 15,000 people. In 1858, another cholera outbreak hit Makkah, and many pilgrims fled to Egyptian shores where they were quarantined.

The coronavirus pandemic made Saudi Arabia shut down the Haram in Makkah and stop pilgrims from doing Umrah. In March 2020, after taking precautionary measures, they started to open up the Haram limitedly. Currently, Saudi Arabia confirms that Hajj will be drastically downsized, with only a very limited number of local residents allowed to attend.

Normally, around 2 million Muslims from around the world would perform Hajj this year. It’s a painful sacrifice, but we have to remember that Allah tests us through sacrifice. One gift that we might overlook in this time of deprivation is the gift of longing—longing for Allah, for His House, for our service to Him in a way that we value greatly. This longing of our hearts to please our Creator just may be the thing that saves us. Ameen.

How can we still make the most of this sacred month from home?