A person is displaced every second due to natural disaster.

Since 2008, around 26.4 million* people have been forced to flee their homes because of flooding, windstorms, earthquakes and droughts. It’s set to get worse. Experts say that if measures are not taken there will be 200 million climate refugees by 2050.** 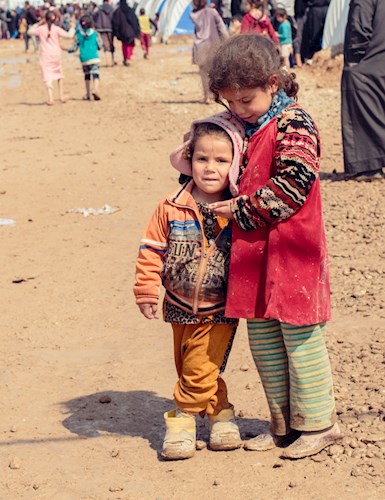 In a decade, climate change is projected to kill around 250,000 people every year through malnutrition, malaria, diarrhoea, and heat stress.

“Whoever relieves the hardship of a believer in this world, Allah will relieve his hardship on the Day of Resurrection.” (Muslim)

Climate change will affect us all, but it’s the world’s poorest people in vulnerable environments whose lives will be devastated by the excesses of today. Worst hit will be the 2.5 billion small-scale farmers, herders and fishermen who depend on the climate for their livelihoods.

In areas that are prone to drought or floods, rising sea levels and extreme weather will cause families to lose their livelihoods and homes as they flee to safety.

In the last decade alone, drought has affected more than 1 billion people.

2 million people are at risk of starvation in Somalia, where almost half of all jobs depend on agriculture. 2.65 million people have been displaced by conflict and extreme weather, a staggering 50% of farmland has been affected by drought, and, in some areas, 40 to 60% of livestock has been killed.****

Over the last two decades, Pakistan has faced around 150 freak weather incidents as a result of climate change, including landslides, forest fires, flash flooding, heatwaves, and melting glaciers. Almost 10% of Pakistan’s population had to flee their homes to safety during the 2010 floods.

Families displaced by conflict and natural disaster, are about to face months of freezing temperatures in shelters that don’t keep out the cold. Support our emergency winter response and help us to save and sustain lives through the bitter cold.

Our Winter Appeal 2019 is providing displaced Somali families with emergency winter shelter kits. £100 will help to keep a displaced family-of-six warm, protected, and dry all winter by providing them with a thick, warm blanket each and waterproof plastic sheeting to reinforce their tent.

Give just £70 and provide a family-of six-with enough nutritious food to last a whole month this winter.

In Pakistan, our Winter Appeal is providing vital winter aid during these harshest months of the year. During winter, district Raheem Yar Khan is battered by floods and extreme weather, and the most at-risk families cannot afford to stay warm and dry.

For £100, our emergency winter kits will provide a displaced Pakistani family with warm jumpers, shawls, blankets, gloves and socks, as well as locally made quilts, caps, scarves, and mosquito nets.

Help families affected by climate change to stay warm and nourished this winter.