The Day of Arafah: what is it and how to reap its rewards 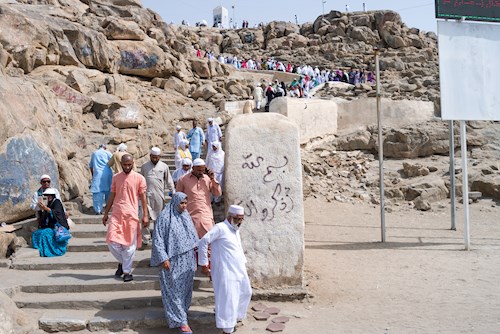 What is the Day of Arafah?

The Day of Arafah is one of the most blessed and powerful days in the year. It falls on the ninth day of Dhul Hijjah – the day before Eid al-Adha – and coincides with the day that Hajj pilgrims head to Mount Arafah, the location where the Prophet (PBUH) gave his Last Sermon.

What do religious texts say about the Day of Arafah?

Aisha (RA) narrated that the Prophet said, “There is no day on which Allah frees more people from the Fire than the Day of Arafah. He comes close and expresses His pride to the angels, saying, 'What do these people want?'”

Allah even takes an oath by this day in the Qur'an:

Imam Ahmad recorded that Tariq bin Shihab said, "A Jewish man said to Umar bin Al-Khattab, ‘O Leader of the Believers! There is a verse in your Book, which is read by all of you (Muslims), and had it been revealed to us, we would have taken that day (on which it was revealed) as a day of celebration.’ Umar bin Al-Khattab asked, ‘Which is that verse?’ The Jew replied:

"This day I have perfected for you your religion and completed My favour upon you and have approved for you Islam as religion."

Umar replied, "By Allah! I know when and where this verse was revealed to Allah's Messenger. It was the evening on the Day of Arafah on a Friday."

What do pilgrims do on the Day of Arafah?

The Day of Arafah, or Yawm al Arafat falls on the second day of Hajj. At dawn, around four million Muslims make the journey from Mecca to the nearby hillside of Mount Arafah on the Plain of Arafah, about 12.5 miles outside of Mecca. From noon until sunset, pilgrims will stand in sincere devotion on this Mount of Mercy, opening their hearts to Allah and praying for His mercy.

Many pilgrims will shed tears as they recite prayers and offer up heartfelt du’as. All pilgrims are in a state of Ihram (purity) and their identical white clothing puts them on an equal footing before Allah.

Where is Mount Arafah?

Mount Arafah is a historic site in Islam, situated on a plain of land around 12.5 miles southeast of the holy city of Mecca. The mount itself is a granite hill, 230ft tall and also known as the ‘Mount of Mercy’ or Jabal al-Rahmah.

What should I do on the Day of Arafah?

On the Day of Arafah, it’s highly recommended that you:

• Fast from sunrise to sunset.

“Fasting on the Day of Arafah expiates the sins from the past and coming years.” (Muslim)

• Recite duas as much as possible, and ask for forgiveness for your sins. This sacred day should be spent in worship and supplication.

“The best of du’a’ is du’a’ on the day of ‘Arafah, and the best that I and the Prophets before me said is ‘Laailaaha ill-Allaahwahdahu la shareekalah, lahu’l-mulkwalahu’l-hamdwahuwa ‘alakullishay’inqadeer.” (There is no god but Allah alone, with no partner or associate; His is the dominion, to Him be praise, and He has power over all things). (Al-Tirmidhi)

• Glorify Allah in all your actions; ensure that you don’t indulge in bad habits or unkind behaviour.

Give generously to charity and go out of your way to help others. Help us to save lives on this Day of Arafah providing healthcare in Syria, fighting malnutrition in Yemen, and installing a desalination plant in Gaza.

• Read the Quran and reflect on its meaning.

• Honour your parents by spending time with them if it’s safe to, listening to their opinions and serving them in any way you can.

Spiritual rewards for all of these actions are multiplied many times over, so this is the perfect time to gain the amazing blessings and mercy of Allah.

During the first ten days of Dhul Hijjah, all Muslims must pay their Qurbani. The Qurbani sacrifice is how Muslims around the world honour the obedience of the prophet Ibrahim (AS) and follow in his footsteps.

It’s easier than ever to pay your Qurbani with Human Appeal. You simply select the country in which you’d like your Qurbani shares to be distributed, and the number of shares you wish to give. We’ve also put together a Qurbani guide to make giving even easier.

Donate your Qurbani through Human Appeal from just £26 this year. Follow in the footsteps of the prophets, and help us to support vulnerable people to have a nutritious meal this Eid.

May Allah allow us to reap the rewards of this blessed day, accept all of our worship, and accept the worship of the pilgrims. Ameen