Conditions are still unliveable for many in Mosul, on the second anniversary of the Battle of Mosul

Human Appeal and UNHCR, two of the most prominent organisations working in Mosul, Iraq have released a report saying that many people who have returned to the city are facing a lack of infrastructure, a collapsed economy and very little basic services. The report states that security has been the main factor for people deciding to either return or remain in displacement.

Commissioned by UNHCR and undertaken by Human Appeal, the assessment had been conducted in three neighbourhoods in West Mosul in order to have a better overview of the humanitarian needs of the returnees and to understand the obstacles that prevent people from returning. The report can be accessed here. 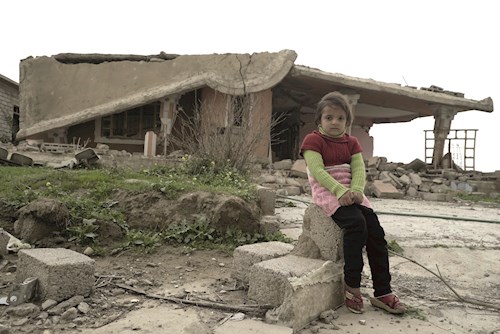 “Our ultimate aim is for the people displaced by the conflict to be able to return home in a safe, voluntary, and dignified manner to a recovered and stable city. Our report with UNHCR uncovered three key finding.

“Firstly, that people are returning to Mosul to face unliveable conditions, not only are their houses in bad conditions, but the roads, sewage systems, electricity, public buildings, bridges are completely intact. Furthermore, there is a continuous threat to the safety of people as the city is highly contaminated with Improvised Explosive Devices.

“Secondly, many who have returned are having a hard time to access basic services such as healthcare, education, electricity and water. This is either due to a lack of the service in place or because they are facing restrictions of obtaining them as a result of their affiliations and lack of documentation.

“Finally, the economy has collapsed in the aftermath of the conflict. Livelihood opportunities, sources of disposable income, and rehabilitation of agricultural land is significant for the road towards recovery and stabilisation. Our assessment has shown that in the lack thereof, families have no choice but to consume their savings to meet their daily needs. Moreover, the lack of income can result into several protection concerns such as child labour, recruitment of youth into armed forces, and gender-based violence. There has been an increase in the number of female headed households, resulting in more vulnerability for the entire household if no livelihood opportunities are in place. Communities in our assessment have indicated a lack of financial support for income generating activities.

“Human Appeal are one of the leading NGOs working in Mosul. We have provided people with emergency relief, protection, food, support with their work, healthcare, education and access to clean water. We were the first NGO on the ground, once West Mosul was liberated from ISIS. Whether it’s running hospitals or rebuilding schools, Human Appeal are determined to overcome these challenges with the people of Mosul.”

• The largest food assistance programme in Mosul, their daily food parcel distributions are reaching over 360,000 people in the city with the World Food Programme (WFP).
• Rehabilitating 30 schools in Mosul to ensure 21,000 children can start school this month with UNOCHA.
• Providing urgent shelter kits to over 216,000 people were homeless during the conflict or living in homes damaged by the violence.
• Providing essential Non-Food Item (NFI) kits to 125,000 people in Mosul and greater Ninewa.
• Providing clean water daily to 25,000 people living in the most heavily destroyed neighbourhoods in West Mosul.
• Running a mobile Medical Clinic across 5 camps offering so far 15,000 people access to a gynaecologist, dermatologist, paediatrician, psychiatrist, internal medicine consultant, minor surgery consultant and numerous nurses.
• The first NGO working in West Mosul after it was retaken from ISIS by Iraqi forces.

The battle for Mosul exceeded UN estimations of $1billion for both the amount of people displaced by the fighting and the cost of rebuilding the city afterwards. Over the course of the Battle of Mosul, over 1 million people were displaced from their homes and 673,000 still remain displaced today.

Human Appeal (www.humanappeal.org.uk) is one of the UK’s fastest growing charities. With a presence in 25 countries, spanning Asia, Africa, Europe, the Middle East and here in the UK, we help in times of crisis and we deliver sustainable development programmes in the world’s poorest nations.

Representatives from Human Appeal are available for interview or to provide guest content from the ground in Mosul.

For the report by Human Appeal and UNHCR please visit this link.