The Rohingya people are in crisis

Since the outbreak of state-sanctioned violence in August 2017, more than 603,000 Rohingya Muslims have fled Myanmar and crossed the border into Bangladesh. More than half of these refugees are children.

According to the UN, the situation in Myanmar has created the world’s fastest growing refugee crisis.

The situation in Bangladesh

In the Bangladeshi border town of Cox’s Bazar, more than half a million new refugees have arrived in less than two months. Unfortunately, the refugee camps in Cox’s Bazar were already filled to capacity by Rohingya Muslims who had fled earlier violence in Myanmar. The infrastructure of existing camps cannot support the thousands of new families seeking safety in Bangladesh’s border towns.

A healthcare emergency waiting to happen

Tens of thousands of people are still sleeping either under makeshift shelters or out in the open, with no protection from the elements. Contaminated water and human refuse are everywhere. It’s impossible for people to maintain good hygiene practices without clean water for drinking or washing.

Many children have developed skin diseases and have chronic diarrhoea. In an overcrowded environment where sewage is left out in the open, contaminating water sources, there is a serious risk of an outbreak of water-borne diseases like cholera.

Innocent children are most at risk

For children crossing the border into Bangladesh every day, barefoot and hungry, there is a real risk that they will be exploited by human traffickers. Many of these children are alone and acutely vulnerable.

Many little ones in the camps of Cox’s Bazar are so malnourished that they require urgent medical attention. However, even more are suffering the psychological consequences of trauma due to the unimaginable horrors they have witnessed.

There is an urgent need for interventions regarding child welfare, including safe spaces for children to learn and health in. Education and child protection services must not be overlooked in the current crisis, because without them, the Rohingya refugee children will become a lost generation, robbed of their childhoods. 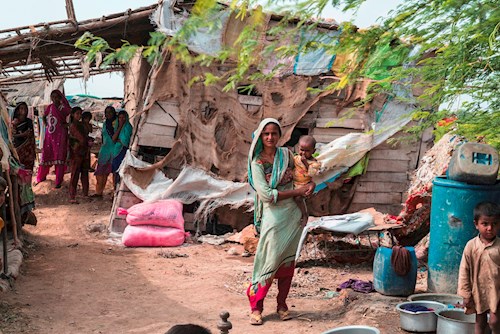 According to Bangladeshi officials, at least 20,000 Rohingya women are currently pregnant and 600 have given birth since crossing the border. There have been reports of women giving birth at the side of roads, without any formal medical help.

Fears that a lack of family planning will stretch resources to breaking point have led to the proposed introduction of voluntary sterilisation methods. Officials have described the Rohingya people as ‘deliberately left behind’ in terms of reproductive education, with little understanding of the importance of birth control.

There’s also a need to provided the option of a termination, STD testing and psychological support for the many, many women and girls who have been sexually abused by Burmese military personnel.

Why have the Rohingya people fled their homes in Myanmar?

The Rohingya Muslims are considered a ‘stateless’ people in Buddhist-majority Myanmar, denied access to basic services and even excluded from official census figures. It’s estimated that at the beginning of the year, 1 million Rohingya people lived in Myanmar.

The latest mass-exodus of the Rohingya Muslims began on 25th August 2017, after Rohingya militants attacked 30 police posts. The Burmese military, backed by local Buddhist residents, responded with an outsize display of force. The Rohingya people were dragged from their homes, their houses and farmlands burned to ashes. Hundreds were murdered, some shot in the back as they fled.

According to analysis of satellite imagery by Human Rights Watch, at least 288 villages were destroyed by fire in northern Rakhine State after August 2017.

Human Appeal is on the ground in the Bangladeshi border towns, providing refugee families with lifesaving humanitarian aid. In Cox’s Bazar, we’ve already helped 4,000 people to access nutritious food. We need your help to continue this vital work.

Just £65 will buy a food parcel that will feed a family of five for a whole month. Just £100 will provide a family with an emergency kit, containing basic essentials like food, clean water and medical supplies.