Dozens of Syrian children were forced to flee a kindergarten after it was bombed on Sunday. Government forces are believed to be responsible and video footage shows panicked children weeping as they run from the site of the attack. These children were determined and eager to learn, in spite of the chaos around them. Schools should be places of sanctuary, not military targets.

The video has been authenticated by the Associated Press and was released by the Ghouta Media Centre, an organisation that has been covering the civil war specifically in the Ghouta region. The attack occurred in the town of Kfar Batna, not far from Damascus.

Before the conflict began, Ghouta was considered the breadbasket of the Syrian capital. It has been under siege for many years and remains under rebel control. The siege tightened earlier this year in the aftermath of a government offensive.

According to the UN, there are 350,000 civilians besieged civilians living in east Ghouta. Medical professionals warn that shortages of food and baby milk will be fatal for children trapped inside the siege zone. Many children in Ghouta are so malnourished that they don’t even have the strength to cry out for food. Families are eating from bins in order to survive.

Last week, images of a starving baby hit headlines around the world. Perhaps in response, supplies for 40,000 people were allowed into the towns of Kfar Batnar and Sqba on Monday for the first time in several weeks.

Syria’s children are in danger

In a conflict situation, children always end up paying the highest price. They are least equipped to process and deal with traumatic situations they might find themselves in or things they may witness. 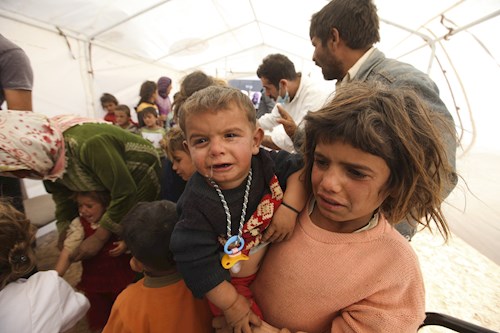 The instability that accompanies six years of war is particularly damaging for children because they are never able to feel safe or secure.  The Syrian conflict has prevented hundreds of thousands of children from accessing education. Millions have been forced to flee their homes and live as refugees in foreign countries, while those who stay are at risk from airstrikes, bullets, landmines and collapsing buildings.

Unicef estimates that there are currently 5.8 million children in Syria who are in need of urgent humanitarian assistance. More than 2 million of these children are trapped in hard to reach areas or living under siege. Access issues mean that NGOs and aid agencies have not been able to reach all children who currently need the polio vaccination.

What you can do to help

Human Appeal has maintained a strong presence on the ground in Syria since the crisis began. Over the last six years, we have helped 8.1 million people in Syria. With your support, we will continue to distribute lifesaving aid to the people who need it most.

Just £65 can buy a nutritious food parcel that will feed a family of four for a whole month. The children of Syria are frightened and hungry. We cannot turn our backs on them in their hour of desperate need.