At least 200 refugees have lost their lives during the perilous sea crossing from Myanmar to Bangladesh, since military operations in late August forced Rohingya families to flee their homes. When the seas are rough, flimsy boats have capsized, plunging families with young children into the water.

On Wednesday, 52 Rohingya refugees arrived in Bangladesh on a makeshift raft formed of jerrycans that had been tied together. Another 16 people were discovered floating in half of a plastic drum. There were no lifejackets. These risky measures show how desperate the situation is in Myanmar for the Rohingya people, leaving them no choice but to make this incredibly dangerous journey.

The situation in Myanmar

On the coast of Myanmar, thousands of desperate people are stranded in rapidly deteriorating conditions, waiting to make the risky crossing to Bangladesh. Speaking to the UN, a young woman called Nadira said: “We waited for six days on the shore with around 2,000 people. We received some rice but there was no water. I saw dead bodies on the shore. They just put them in a bag and didn’t bury them properly.”

Diarrhoea and dehydration have already claimed lives, including that of Nadira’s friend Hazera’s three year old son. Some people have resorted to drinking sea water, which makes them vomit. There are no sanitation facilities and no shelter.

Life in the refugee camps on Bangladesh’s border

However, life in the Bangladeshi border camps is far from easy. Food, clean water, shelter and medical care is all in short supply. The UN has determined that at least one third of all Rohingya refugee families are vulnerable, and that 14% are single mothers, struggling to hold their families together in incredibly harsh conditions.

Women, children and the elderly are most vulnerable to malnutrition and disease. The overcrowded camps that lack adequate sanitation facilities are an ideal environment for disease to spread. Dysentery and cholera are serious concerns. 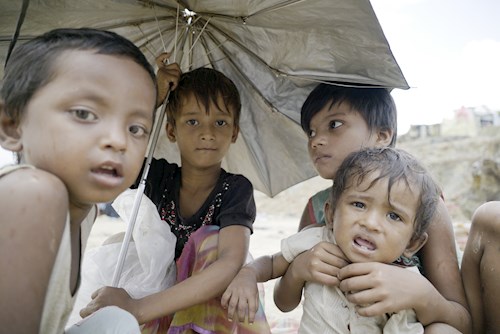 A ‘crisis of children’

More than half of those who have fled Myanmar are children, according to the United Nations Children’s Fund. In the camps, they splash through the dirty water and human waste that covers the muddy ground. Many have skin conditions and diarrhoea. Others sweat out fevers, their little bellies swollen like balloons with malnutrition.

Elhadj As Sy, a top Red Cross official, has dubbed the situation a “crisis of children”. Due to the chaos of the journey and the risks associated with the crossing, at least 40,000 children are believed to be without at least one parent. Many children are unaccompanied, having lost their parents when they fled Myanmar or in the maze of the camps. They are highly vulnerable to human traffickers and several Rohingya people report being approached by people who are looking to buy children.

Human Appeal is on the ground in Myanmar and Bangladesh, providing vital aid to the people who need it most. Thanks to your generous donations, we’ve already distributed food, non-food essentials and medical aid to 15,000 people and provided 3,100 individuals with tents for temporary shelter in the border town of Cox’s Bazar.

However, we need your support to install much-needed sanitation facilities, and provide thousands of refugee children with education and psychological services to help them heal. By donating to our Rohingya Emergency Appeal, you can help to safeguard vulnerable little ones and give the precious gift of clean water.

You can save a life today.