The water crisis in Gaza is only getting worse

In Gaza, 90% of water is unfit to drink. People rely on a single underground aquifer, but up to 95% of the water in it is contaminated by chemicals, sewage and sea water. By 2020, the UN estimates that all water in Gaza will be polluted, making the region unliveable.

Clean water is essential for human life. Without it, we cannot survive as a species. The people of Gaza are struggling every day to find enough water to wash and cook with, and are often forced to drink dirty water.

The UN reports that Gazan families are spending up to a third of their income on water, forcing them to sacrifice food, medical care and education. Crucially, giving up this huge chunk of income to purchase water from unlicensed desalination plants doesn’t guarantee that it will be fit to drink.

Water contaminated with salt causes skin infections and makes people’s hair fall out. Water polluted by human faeces and other refuse can cause the spread of deadly diseases like cholera. Water containing high levels of chloride and nitrates can have serious consequences for pregnant women and young children.

The impact of the 2014 Israeli-Palestinian conflict

In 2014, hostilities intensified between the Israeli military and armed Palestinian groups. Even three years on from the conflict, 29,000 people remain displaced and the population is still struggling to recover from the long-term effects of the violence. An NRC report from 2015 shows that the military action resulted in $34m in damages to Gaza’s water infrastructure. 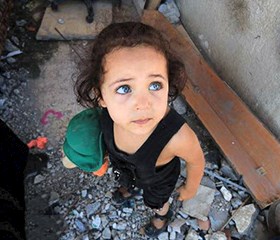 Mahmoud Elkhafif, UNCTAD's special coordinator for assistance to the Palestinian people said: “The last war on Gaza, of course, resulted in the destruction of some of the infrastructure, the water holes and the pumping stations were [heavily hit.] More than 50 percent of the water infrastructure could not be accessed”.

As a result of the Gaza blockade, incomes in the region have stagnated and economic growth is extremely slow. Unemployment in Gaza is at one of the highest levels in the world, currently standing at 42%. Among Gaza’s young people, 60% are unemployed.

Nearly 40% of Gaza’s people live In poverty, with 21% considered extremely poor. Half of all Gazans go to bed hungry every night and require food assistance to meet basic nutritional goals.

Gaza’s water crisis has been exacerbated by the severe shortages of electricity. In June 2017, the Palestinian Prime Minister cut the amount of electricity that Gaza could receive to just 2-4 hours each day in an attempt to force an opposing group to relinquish control of the territory. With daily blackouts of up to 22 hours every day, families cannot perform basic tasks including cooking or pumping water. They are forced to wash clothes by hands and the pitch-black streets at night feel unsafe to walk down.

As winter approaches, the needs of the Gazan people are expected to increase and put further pressure on Gaza's already overloaded water, health and sanitation systems.

What you can do to help

Human Appeal has maintained a strong presence in Gaza for many years, and with your support, we’ve been able to build a water well and a safe desalination plant in Al-Zannah in southern Gaza. Every day, the well is busy with families who are filling containers with clean water.

We must continue to improve access to safe water for the people of Gaza. Time is running out and within the next 12 months, there might be no clean water left for the whole region. Each day that passes, more people in Gaza are forced to drink and wash with dirty, salty water.

By giving generously to our Water Purification project, you can help a family in Gaza access safe, fresh water. Give the precious gift of clean water today.