The story of the Prophet Ibrahim (as)

As Muslims around the world arrive for the sacred Hajj pilgrimage or prepare for fasting, prayer and charitable giving during the Dhul Hijjah period, it’s important that we remind ourselves of the story behind Hajj.

It all begin with our father, Prophet Ibrahim (as), one of the greatest of God’s creations. His life was filled with tribulations, all of which we can learn from, and through which Prophet Ibrahim became an exemplar for mankind. Through his sincere submission and unflinching faith, he came to be known as The Friend of Allah.

A Prophet is born

In the kingdom of Babylon, idols were worshipped as though they were gods. Ibrahim’s father Aazer was a well-known sculptor and he would craft idols from stone or wood. As a child, Ibrahim would watch his father work, often using the finished idols as playthings.

Ibrahim couldn’t understand why people were worshipping these ornaments of stone in the temples. His father explained that the statues represented gods and people would offer them food and other gifts whilst asking for favours. This explanation didn’t satisfy Ibrahim. In his heart, he felt that it was wrong.

As he grew older, Ibrahim became even more convinced that the idols his people worshipped were false. He would often question, ‘how could statues of wood and stone be gods?’ Especially considering the statues would have no power to either benefit or harm, being mere objects.

Ibrahim hears the voice of God

One night, Ibrahim travelled up to a mountain to watch the sky and observe nature. A while later, Ibrahim heard a voice calling him – it was none other than his Lord, Allah. He commanded Ibrahim to submit and become a Muslim.

Trembling, Ibrahim fell to the ground. He prostrated himself before Allah, crying out: “I submit to the Lord of the universe!” Eventually, he got to his feet and made his way back home. Ibrahim’s life was forever transformed – and his heart was filled with great peace.

Ibrahim tries to spread the word of Allah

Ibrahim now had a brand new mission – to call his people to the Truth and help them accept Allah as their one true God. First, he turned to his father who he loved so dearly. Ibrahim said: “O Father! Why do you worship that which doesn't hear, doesn't see, and cannot avail you in anything? O father, I have got knowledge which you have not, so follow me. I will guide you to a straight path.” [Quran 19:42-48] Angrily, his father rejected Ibrahim’s request and told his son to get out of his sight. 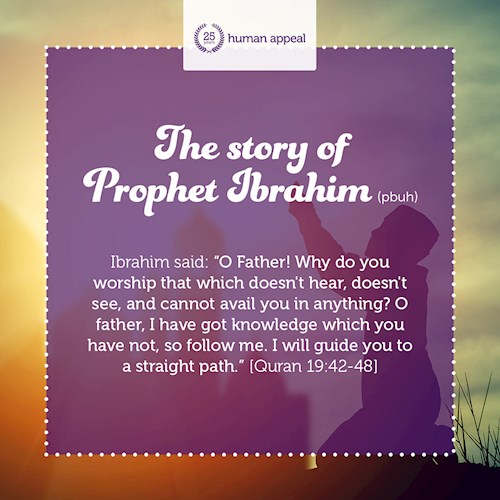 Undeterred, Ibrahim decided to channel his efforts towards bringing the people of his town towards the message of Allah, but they rejected his words and threatened him with violence. Ibrahim was given inspiration to adopt a different approach to change the hearts and minds of his people.

On the eve of a big celebration, Ibrahim knew that the townsfolk would be leaving to share a huge feast. When they had left, Ibrahim went into their temple to carry out a prophet mission: to demolish their idols, except one, the largest idol, so that he could explain to them the error of their ways.

When the townspeople returned, they were horrified. Their idols lay in ruins. They quickly remembered that Ibrahim had been encouraging them to worship Allah alone and to submit to the monotheistic faith of Ibrahim. They asked him: “are you the one who has done this?” Ibrahim said no. “This statue, the biggest of them all has done it! Ask them about it!” The townspeople replied: “You know they cannot speak!” And Ibrahim said: “Then how can you worship things that can neither speak or see. They can’t even protect themselves. Have you all lost your minds?” 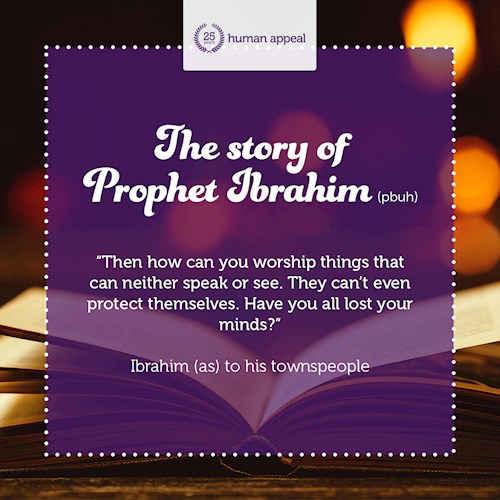 They were silent, knowing that Ibrahim had made a valid point, but their pride wouldn’t allow them to reject the idols they’d been worshipping for generations. Anger surged in the crowd.

The miracle of the fire

The crowd bayed for Ibrahim to be burned. They wanted revenge for the damage to their idols and only Ibrahim’s blood would do. The decision to burn him alive was sanctioned by Nimrod, the king of Babylon, and his priests. News travelled fast and thousands of people from all over the kingdom arrived to witness the execution.

A huge pit was dug in the ground and filled with wood. It was the biggest fire anyone had ever seen. Ibrahim was shackled, his hands and feet chained tightly together, and he was fitted into a giant catapult that would throw him in the fire. At that moment, Ibrahim was visited by the Angel Jibreel, who said: “Is there anything you wish for?”. Ibrahim replied that his only wish was for Allah to be pleased with him. He could’ve asked for anything, but instead of begging for his life to be saved, he chose to ask for the blessing of God. 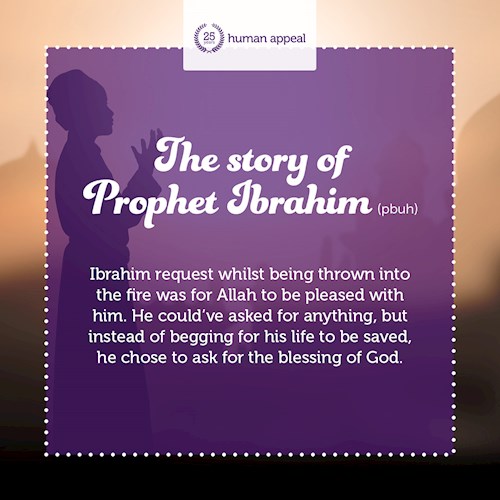 Allah would not allow the Prophet to be executed. He ordered the fire to be nothing but cool and peaceful for Ibrahim, and the fire obeyed, burning only Ibrahim’s chains. Ibrahim walked out the fire without a bead of sweat upon his skin or hint of smoke coming from his clothing. Spectators gasped in amazement, crying: “Ibrahim’s God has saved him from the flames!”

After defeating the Babylonian king Nimrod in a battle of words, Ibrahim continued his important mission – spreading the word of Allah. Only a woman named Sarah and a man named Lot would listen and followed Ibrahim. The group of three travelled to Syria and Palestine, calling people to the service of Allah and performing good works.

Ibrahim and Sarah married, hoping to have children who would help to spread the message of Allah but as time passed, it became apparent that Sarah couldn’t get pregnant. The couple relocated in Egypt, where Sarah was given a female servant named Hajar.

Sarah was saddened to see her husband’s hair growing white. She couldn’t bear to watch him age without fathering any children, so she offered Hajar as a second wife to her husband. After praying to Allah, Ibrahim and Hajar were blessed with a baby boy who they named Ismail.

Hajar and Ismail’s trials in the desert

Allah instructed the Prophet Ibrahim to prepare Hajar and baby Ismail for a long journey. The family travelled to the Arabian desert, where sand dunes stretched out for miles and there was no sign of human habitation. Ibrahim made Hajar and Ismail climb a hill called al-Marwa and left his wife and child under the shelter of a tree, equipped with a bag of dates and some water. He then set out for home.

Hajar and Ismail’s supplies of food and water were soon gone, and mother and son became increasingly dehydrated. In desperation, Hajar ran up the hills of as-Safa and al-Marwa seven times, straining her eyes to see if a passing nomad could be spotted in the distance. Finally, she collapsed, exhausted.

Then Hajar heard a voice. The Angel Jibreel appeared, striking his foot against the sandy ground. A stream of water gushed forth and Hajar scooped up water to drink and fill her water-skin with. The stream was called Zamzam, and to this day, Muslims on the Hajj pilgrimage will drink this holy water.

Hajar now had a water source that allowed her to trade with passing travellers. Soon mother and son had all the food and drink they needed. More and more people were drawn to the running water and set up camp nearby. They sent for their families and started a new life in Makkah, turning the barren desert into a bustling settlement. Ismail grew into a thoughtful and healthy young man and learned Arabic.

Years later, Ibrahim returned to Makkah to see his son a grown man. He learned that Hajar had passed away in his absence. Allah wanted to test Ibrahim’s submission again.

In a dream, the Prophet Ibrahim was instructed to sacrifice his son Ismail to Allah. Ibrahim told Ismail about the dream, and both agreed to submit to the will of God. Ismail lay prostrate with his forehead touching the ground, while his father laid a sharp knife upon his neck.

At this moment, Allah called down: “O Ibrahim! You have done my bidding and now you will be rewarded!” A large ram appeared as an alternative sacrifice, and instead of killing his son, Ibrahim slaughtered the sheep to the glory of God.

The construction of the Kaaba

Together, Ibrahim and Ismail continued to call people to worship God but there was no place solely for praying to Him. Ibrahim wished that there was a special place for people to find peace and focus completely on the praise of Allah. Soon after, Allah ordered Ibrahim to build the Sacred House, or the Kaaba. 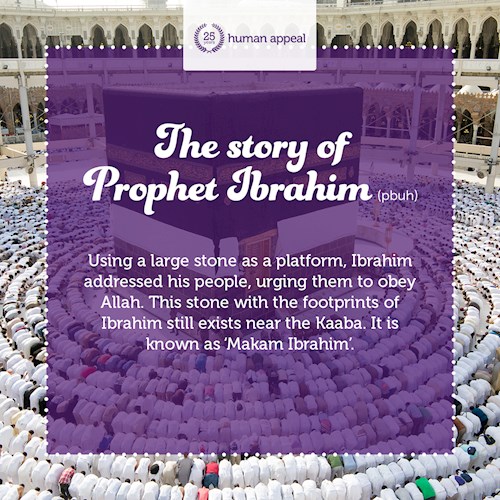 Ibrahim and his son worked together to build the Kaaba. They chose a hillock, elevated from the surrounding land and began laying foundations. Ismail found the stones, while his father placed them to build high walls. When the construction was finished, the Angel Jibreel came down from heaven to teach Ibrahim the rituals of Hajj.

Using a large stone as a platform, Ibrahim addressed his people, urging them to obey Allah. This large stone can still be seen near the Kaaba. It is known as ‘Makam Ibrahim’.

Continuing the sacred rituals of Hajj and Qurbani

Every year, millions of Muslims from all over the world travel to Makkah in Saudi Arabia to circle the Kaaba that Ibrahim (as) and Ismail (as) built and run between the two hills of al-Marwa and as-Safa, just like Hajar did.

We also commemorate the obedience of the Prophet Ibrahim (as) by sacrificing an animal (usually a sheep or a cow), or paying for an animal to be sacrificed on their behalf and the meat distributed to the poor.

With Human Appeal, you can rest assured that every bit of your Qurbani payment will reach those in desperate need. You can even choose the country you wish to support with a much-needed parcel of Qurbani meat that will feed a hungry family for many months to come.

As the amazing festival of Eid ul-Adha approaches, we must remember the ultimate sacrifice of the Prophet Ibrahim (as) and fulfil our responsibility to show mercy to families living in terrible poverty worldwide. It’s only when we are merciful towards the less fortunate among us that Allah shows us his divine mercy.

Give your Qurbani today.