The situation in Gaza is terrible this winter

The Gaza Strip is one of the worst places in the world to be this winter. Thousands of families are living in slums and makeshift shelters that flood with freezing water when it rains, and offer little protection from the harsh winter temperatures. Nights are bitterly cold and fuel for cooking and heating is scarce. Pregnant women and small children are living in these shocking conditions.

Gaza is part of the Palestinian territories, bordered by Egypt and on the eastern coast of the Mediterranean sea. It has a population of 1.9 million and after years of bitter conflict, the people of Gaza are some of the most vulnerable in the world.

The current situation in Gaza is bleak. The 2014 escalation of violence has shattered infrastructure, destroyed more than 18,000 homes and torn families apart. 39% of the population of the Gaza Strip live below the poverty line and 47% of households are experiencing food insecurity.

Gaza’s public health system suffers from shortages in skilled staff and medical supplies. 17 hospitals and 56 primary healthcare facilities have been destroyed or severely damaged by the hostilities. Hundreds of amputees have been left waiting for prosthetic limbs and delays to performing elective surgeries cause unnecessary pain, frustration and increase the chances of infection. The constant power cuts make delivering vital services very difficult and the electricity deficit has reached a high point of 65%.

In any conflict, it is children who endure the most suffering. The children of Gaza have witnessed horrors that no young person should have to see. They live in fear, without stability or security.

More than 160,000 children are in desperate need of continuous psychological support due to the trauma caused by living through a terrible conflict.

Palestinian children living in Gaza are being denied an education, as bombing has rendered 50% of all kindergartens and 30% of schools unfit for use. The UN estimates that 1,000 of the 2,955 children injured due to the violence will be permanently disabled. 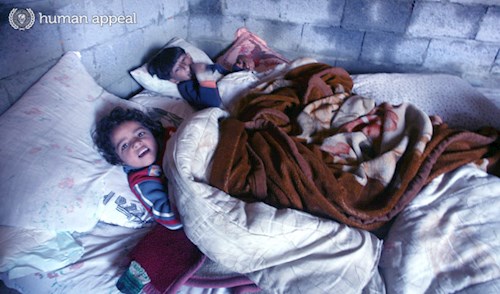 What can I do to help?

Human Appeal is in Palestine, providing humanitarian aid to the people of Gaza this winter. Emergency provisions, including food parcels, fuel, warm clothes and shoes, blankets and mattresses are being distributed to vulnerable families who rely completely on this support. The generosity of our donors has made our winter campaign possible.

With your help, we can save lives in Gaza and bring an end to the suffering of innocent children. Join us. Act now.