Journalist and Commentator Remona Aly was the host for the evening. Human Appeal CEO, Othman Moqbel, and Caabu Director, Chris Doyle, also spoke at the event at One Great George Street, London. The evening was organised in association with OnPoint Strategies to celebrate the 25th Anniversary of Manchester-based Human Appeal.

In his speech, Sir Alan Duncan MP praised the UK government for continuing to give 0.7% of the Budget to international aid and called on the British public to not forget about the crises continuing in Palestine and to not ignore the crisis in Yemen, saying “I hope we can rescue Yemen from the edge of absolute catastrophe.” 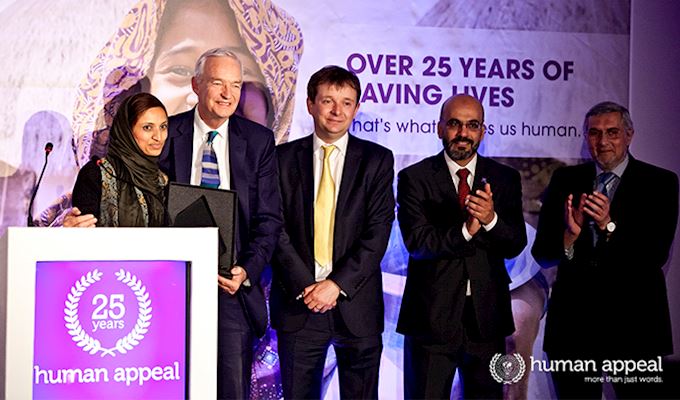 The SNP’s Parliamentary Group Leader, Angus Robertson, praised the efforts of Lord Dubs, who was one of 25 Parliamentarians in attendance, for his work to get the UK government to accept unaccompanied refugee children from across Europe and touched on Lord Dubs’ history as one of the children who arrived in Britain on the Kindertransport in the Second World War, He called on the UK government to “learn from history” and help adult refugees as well as children.

Shadow Secretary of State for International Development, Diane Abbott MP, spoke highly of Human Appeal, following her recent trips to see their work in refugee camps in Lebanon and Turkey. Ms Abbott told those in attendance: “Until you see the work Human Appeal do first hand, you cannot appreciate the magnitude of their work.”

Esteemed broadcaster Jon Snow told the audience: “We must treasure our multicultural society and do everything we can to uphold it,” admitting he hadn’t actually met a Muslim until he was 18-years-old. He spoke highly of how integrated communities are in the UK.

Othman Moqbel thanked everyone in attendance for their support in helping the Human Appeal deliver aid to 4.4million people in Syria. He told guests: “Having returned just today from the World Humanitarian Summit, I can feel the world waking up, I can see the desire for change: leaders have committed to The 2030 Agenda for Sustainable Development. We see huge challenges but we see even greater opportunities.

“We need to address the Syrian crisis, which is the biggest refugee and displacement crisis of our time. This demands an unprecedented act of global solidarity, where our actions must speaker louder than our words.”
Mr Moqbel insisted “The international community must treat the causes of the conflicts and not only deals with the symptoms, in recent years it has been in a state of crisis – reacting to conflicts rather than proactively address the root causes.”

This event was not just to mark the upcoming start of Ramadan and Human Appeal’s campaign, which will see British Muslim’s donate over £100m to good causes, but 2016 also marks Human Appeal’s 25th anniversary.

After the event Mr Moqbel spoke of what a roaring success it was; “It is a huge honour to have such overwhelming support and to be able to share Ramadan with powerhouses from all across the political spectrum. We want to thank everyone who has helped us, whether they are a minister in government, someone donating £2.50 or a volunteer giving up their time. We especially want to thank our partners Caabu and their director Chris Doyle for their outstanding work and support.”