It’s that time of the year again where we complement our Eid celebrations with the additional spiritual act of Qurbani. This is a sacred act of sacrifice packed with immense blessings, celebrations and unifies Muslims around the world.

“And complete the Hajj and 'umrah for Allah. But if you are prevented, then [offer] what can be obtained with ease of sacrificial animals.” [2:196] 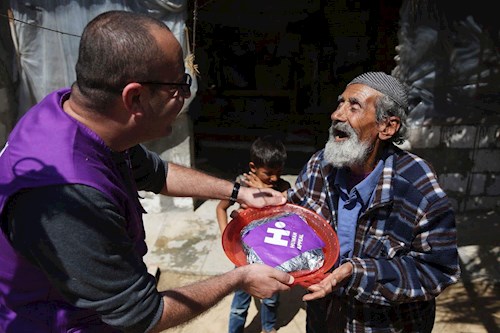 Qurbani – also known as Udhiya – is all about sacrifice. Every year after Eid ul Adha prayers, Muslims slaughter an animal – a sheep, cow, camel or goat – echoing the prophet Ibrahim’s willingness to obey God’s command to sacrifice his son.

A minimum of one third of the meat must go to poor or vulnerable people, andtraditionally, the remaining two-thirds are split between the donor’s family and neighbourhood. In the UK, many people choose to perform their Qurbani in poorer countries, where their donation can have the greatest impact.

Who should give Qurbani?

Qurbani is incumbent upon all sane adults who have wealth in excess of their needs, according to most schools of thought. This usually means that anyone who is eligible to pay zakat, must also perform Qurbani.

When should I give my Qurbani donation?

You can donate your Qurbani at any time up until the 13th day of DhulHijjah, or the third day of Eid ul Adha, since the sacrifice must be carried out before sunset on the 14th of DhulHijjah. But, the sooner we receive it, the better chance we have of ensuring that the beneficiary will have their parcel in time for Eid ul Adha.

Who does my Qurbani help?

In the midst of a global food crisis, Qurbani parcels are more important than ever. Famine has been declared in Yemen, where the death toll is expected to rise to 18.4 million by the end of year. That’s almost two thirds of the population.

In war-torn Syria, more than half of the country’s population – 10.5 million people – can’t find enough food to eat. In Palestine, 72% of people lack food security with 40% living below the poverty line.

With around 815 million people in the world chronically undernourished, your Qurbani payments are absolutely essential in providing vulnerable families with nutritious food and the knowledge that they are cared for and supported. The gift of Qurbani is also the gift of hope.

What is the historical significance of Qurbani?

Every year, Muslims perform Qurbani, reflecting the Prophet Ibrahim’s legacy, who dreamed that God asked him to sacrifice his only son, Ismail. In obedience to God, Ibrahim prepared to carry out this sacrifice but, at the last minute, God spared Ismail and sent a ram to be sacrificed instead.

Although Ibrahim (as) loved his son very much, he was willing to give him up due to Allah’s instructions of sacrifice. To this day, the spiritual action of Qurbani is carried out in honour of Prophet Ibrahim (as)’s surrender to the will of Allah. When we offer our Qurbani, we prove that we too are completely obedient to Allah (swt) and His commands.

Which animals are eligible for Qurbani?

The animals commonly used for Qurbani are sheep, cows, goats and camels. They can be male or female but must be in good health and free from any defects. The goats and sheep must be at least one years old, the cattle two years and camels five years old.

Each Qurbani animal makes up a certain number of shares. A small animal such as a sheep or goat counts as one Qurbani share, while larger animals such as camels and cattle count as seven Qurbani shares each. You can buy as many shares as you like, one for each family member, and even for loved ones who have passed away.

“The Prophet (saw) offered as sacrifices, two horned rams, black and white in colour. He slaughtered them with his own hands and mentioned Allah's Name over them and said Takbir and put his foot on their sides.” [Bukhari]

Why give my Qurbani with Human Appeal?

Because Human Appeal has a proven track-record! 100% of your Qurbani donation goes straight to the beneficiaries, with no administrative fees at all! We work all year-round in 25 countries responding to emergencies and building resilience in local communities. When you donate your Qurbani with Human Appeal, you can rest assured knowing that we have the Islamic checks, structures and quality inspections. Even if you donate last minute, your donation is in safe hands with Human Appeal.

We identify the families who would greatly benefit from a Qurbani parcel, and ensure that they receive the meat before Eid ul Adha.

For many people, this will be the only time of year that they can eat meat. Our goal is to enable as many vulnerable families as possible to enjoy nutritious food on the festival of Eid.

Where will my Qurbani be distributed?

This year, we’re distributing Qurbani parcels to families in 13 countries worldwide. For a full list of locations, please visit our Qurbani page.

How much will my Qurbani donation buy?

A sheep or goat counts as one Qurbani share, whereas a cow or camel is equal to seven Qurbani donations and can be shared with other donors.

Yes – there are no religious restrictions on who can receive your Qurbani donations.

Can I give Qurbani on behalf of someone deceased?

We hope this article has given you a clear insight to Qurbani, its rules and its virtues. We pray that Allah (swt) accepts your Qurbani and makes it a source of benefit for both yourself, your family and the less fortunate.