Rohingya babies at risk in the squalid camps of Bangladesh

According to Save the Children, there will be over 48,000 babies born this year to Rohingya mothers living in refugee camps on the Bangladeshi border. New data shows that across 2018, there will be 130 live births every single day.

Newborn babies will face serious risks, including malnutrition and diseases like measles, diphtheria and cholera. Without sustained humanitarian interventions, it’s unlikely that the majority of these little ones will survive their first year. The projected number of new babies in 2018 also raises questions about the extra pressure on existing infrastructure and how contraceptive education should be disseminated among the Rohingya population. 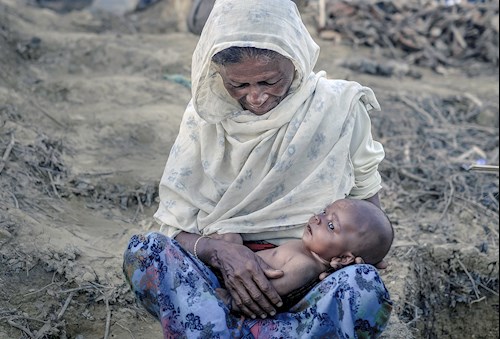 Why are the Rohingya Muslims in Bangladesh?

More than 655,000 Rohingya Muslims have fled devastating violence in Myanmar since the military crackdown in August last year. On arrival in the border town of Cox’s Bazar, they joined the 200,000 refugees already living in overcrowded conditions after previous outbreaks of violence

The Rohingya refugees have witnessed appalling acts of violence. Their homes and farmland were destroyed by government forces and the total number of those killed is still unknown. Children have seen their families killed right before their eyes. Innocent civilians were shot or cut down with machetes as they tried to run away. Thousands of women and girls were victims of sexual violence.

Many have arrived in Bangladesh with gunshot injuries or wounds from shrapnel and landmines. Even more are traumatised by their experiences and are in desperate need of psychological support. To make matters worse, a diphtheria outbreak has hit the camps, killing at least 27 people. 160 new cases of this highly infectious disease are being reported each day.

In border towns like Cox’s Bazar, the World Health Organisation (WHO) has warned that basic services are under severe strain. Cox’s Bazar has one of the densest refugee populations in the world and this means that the space available for humanitarian agencies to work in and open vital facilities is extremely limited.

Thousands of people are living in makeshift shelters that let in the rain and wind. Others don’t even have tents to protect them from the elements. Rohingya families are in desperate need of nutritious food, basic healthcare and shelter essentials. A new UN study shows that 90% of the new refugees are under-nourished, despite receiving emergency food assistance

Due to the rapid influx of refugees, there has been no planning as to how the refugee camps are laid out. Many shelters are very far away from toilets, open sewers are commonplace and insect larvae is contaminating many boreholes. Without clean water or adequate sanitation facilities, there is a serious risk of disease spreading. After heavy rainfall, the terrain underfoot has become a foul swamp of mud, garbage and human waste.

In a situation where water sources are contaminated and WASH facilities are scarce, newborns are most at risk. Their tiny bodies aren’t able to fight off infections, even small ones, particularly if their mothers are too malnourished to produce the milk they need to grow.

60% of all the Rohingya refugees in Bangladesh are innocent children. Many have been orphaned by the shocking violence in Myanmar, or separated from their parents in the chaotic and perilous oversea journey to Bangladesh. They are easy prey for child traffickers who circle the Cox’s Bazar refugee camps, hoping to ensnare unaccompanied little ones. 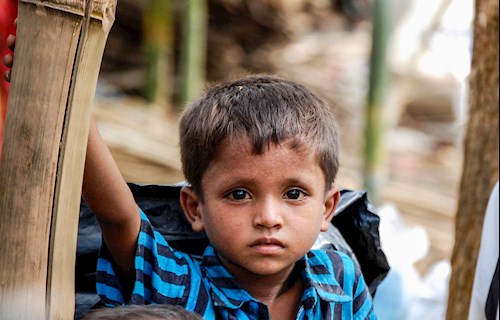 A quarter of all children under 5 in Cox’s Bazar are suffering from malnutrition and only 22% of births are currently taking places in health faculties. The majority of babies are being delivered in tents or in the open air. If complications do occur, many women have no way of accessing the appropriate treatment, putting both the mother and new baby at risk.

Human Appeal is on the ground in Cox’s Bazar, providing lifesaving aid to refugee families who have lost everything. However, we can only continue this vital work with your support.

In the winter months, heavy rainfall and lower temperatures mean that the Rohingya refugees living in flimsy tents or makeshift shelters face even greater suffering. The wet weather makes the muddy ground virtually impassable and can causing flooding.

For £250, you can give a Rohingya family with small children shelter essentials to keep them dry even when it’s raining. For £165, you can provide a vulnerable family with winter clothes, blankets, food and fuel for heating, keeping them warm in the wettest and coldest months of the year. Just £65 will provide a malnourished family with enough nutritious food for a whole month, allowing a breastfeeding mother to keep her newborn baby fed.

Together, we can stop winter taking innocent lives.