The tragedy of baby Malak

Nassar is a father of three, living in Yemen. When we met him, he was taking his youngest child, a nine-month-old baby girl called Malak, to the hospital. Malak had contracted cholera, just like Nassar’s other two children.

With tears streaming down his face, he told Human Appeal how he couldn’t afford proper medical treatment for his three poorly children. Nasser doesn’t have a job and the family are surviving on a small amount of rice donated by a kind neighbour. They don’t have a clean water supply and Nasser doesn’t even have enough money to buy a plastic bag of water. Without fresh water, Nasser’s children cannot recover.

The appalling waste of a young life

The next day, baby Malak was dead. Her immune system, weakened by lack of food, dirty water and the cold, couldn’t withstand cholera. She passed away in her father’s arms. He held his baby’s wasted body for hours, telling himself that she’d wake up any minute. He tickled her feet, hoping she would laugh. 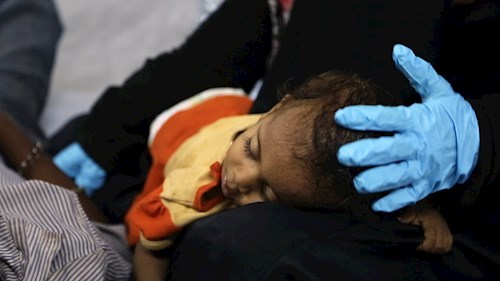 Cholera is perfectly treatable, but without clean water, nutritious food and proper medical attention, the disease can easily be a killer. Nothing will bring baby Malak back to her father, but we can prevent more innocent lives being lost this winter.

A child under the age of five dies from hunger or sickness every 10 minutes in Yemen. Two years of relentless conflict have devastated the Middle East’s poorest country, destroying infrastructure and plunging millions into crisis. Over 20 million people are currently in desperate need of humanitarian assistance.

As of 21st December, the International Committee of the Red Cross has found that the number of cholera cases in Yemen since April has hit a staggering 1 million. The cholera epidemic has been caused by lack of access to clean water and sanitation facilities, and is one of the fastest-growing outbreaks of the disease in modern history.

Bombing campaigns have destroyed vital water pipelines and rubbish and human waste goes uncollected and untreated, contaminating remaining water sources. Families are forced to pay extortionate prices for small bottles or bags of clean water. If they don’t have any money, they have no choice but to drink, cook and wash with dirty water.

The blockade is putting millions of civilians at risk

The recent blockade has prevented life-saving essentials such as food, medicine and fuel from reaching vulnerable families. It is weakening Yemeni communities that have already endured so much suffering. If basic medical supplies are not permitted to enter the country, cholera patients cannot be treated. The epidemic will continue to worsen and millions could die this winter.

Among all the conflict-affected countries worldwide, Yemen is suffering from the highest levels of hunger and malnutrition. 17 million people – 60% of the population – do not know where their next meal will come from. 3.3 million children and pregnant or lactating women are acutely malnourished, a 57% increase from late 2015. Acute malnutrition causes stunting and other developmental issues in children, makes them vulnerable to disease and prevents their little bodies from healing if they become hurt or sick.

Together, we can save lives this winter

Our teams are on the ground in Yemen, supporting families like Nassar’s during the toughest months of the year. Baby Malak is unfortunately beyond help now, but with your support, we can stop more innocent lives being lost.

£165 will buy a blankets, winter clothes, food and fuel, allowing fathers like Nassar to keep their little ones warm in the cold weather. £250 will give a family the tools to waterproof their home and stop freezing water from leaking on to mattresses and bedding, increasing the chances of sickness. £65 will provide a family of four with nutritious food for a whole month that will strengthen the bodies of innocent children and allow them to better withstand illness.

With your help, we can stop winter killing today.