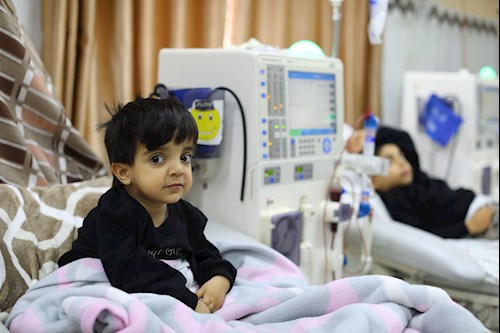 During Ramadan this year, Human Appeal highlighted the story of Um Mohammed, 28, who lives in Gaza, with her four children, three of whom were suffering from kidney failure.

Two of her children, Mohammed (12) and Majd (4), needed regular dialysis treatment which the family could barely afford. Because the tap water in Gaza is not properly treated, Um Mohammed had to spend the family’s money on mineral water, just so her children could drink.

Majd died on Tuesday at 2pm. He was four.

Mohammed is now in a critical condition too.

These stories do not end when the video ends, or when we’ve scrolled past on social media.

97% of the water in Gaza isn’t fit for human consumption. Human Appeal is the only charity to be disinfecting the entire water network of Gaza, allowing all its children to have access to clean water. We’re also installing a desalination plant in Rafah, which will provide 60,000 people with clean water for years to come, but it wasn’t enough for Majd. Every day a mother in Gaza goes through what Um Mohammed has gone through.

“You may read this and think this is just another case of a charity using a child’s suffering to raise money, but you tell me – where else is the help coming from? “I happen to think every case like this is an unmitigated tragedy, and the reality that this happens every day should make everyone angry at how this is even possible in the modern world. “Majd’s life had barely begun before it was taken away by preventable circumstances. He deserved better.”

You can watch Human Appeal’s video of Um Mohammed and her family’s story here: https://youtu.be/QR7AzWeQW3Y

Please donate to our Gaza water appeal in Majd’s honour. Please help us to make sure that no child is forced to drink water that weakens them. Every donation helps us to provide clean water, helps us to save lives.