Syria: humanitarian aid agency releases report calling for more help for Syrian refugees on the eighth anniversary of the conflict.

Human Appeal, a humanitarian aid agency based in Manchester, releases a report today [15 March] highlighting the main concerns of Syrian refugees who are keen to return home: safety upon returning, education and psychosocial support. Human Appeal, which has helped an estimated 8,124,658 Syrian people since the conflict began, is calling on the international community to do more to help Syrian refugees. Interviewees from the charity are available in Manchester and Iraq. 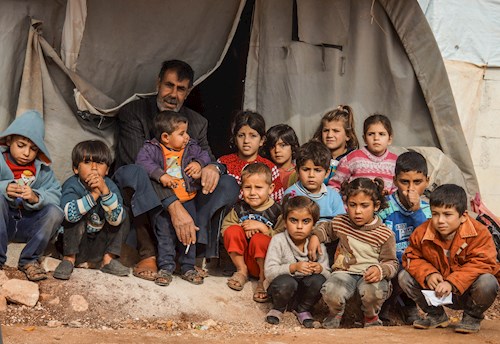 The report, Syrians Then and Now, focuses on the town of Arsal. Over half a million Syrians have taken refuge in Arsal, an area situated in the mountain range that separates Lebanon and Syria. Arsal is one of the poorest towns in Lebanon and at a high altitude, making it particularly vulnerable to cold weather during the winter months. It is also the place where some of the poorest and most vulnerable refugees have ended up.

Human Appeal is providing aid to refugees in the Arsal camp and has been speaking to some of its residents. The report provides a summary of their concerns and includes case studies of some of the people living in the camp. Some of the residents Human Appeal spoke to had been in the camp for over seven years. They highlighted their three main concerns:

As the conflict draws to a close, the biggest barrier to stopping the refugees of Arsal from trying to piece back together the lives that this conflict has shattered will be if they are not able to and do not feel safe to return. The political situation in Syria is completely different to what is was pre-conflict. Assurances for the safety of Syrians who want to return need to be met and upon returning and international scrutiny of this process, with clear and effective repercussions if their safety is breached. Otherwise Syrian refugees will remain in a state of futureless limbo.

Human Appeal workers noticed that every tent in Arsal had multiple children living inside. When speaking to the parents there was a uniform concern for the quality of the education they are receiving in the refugee camps and how it will impact their lives. They are receiving basic education but nothing formal.

Whilst NGOs provide informal education, if the potential of a generation of Syrian children isn’t to be lost to the refugee camps of Lebanon, local and national governments must work with the education sector and NGOs to provide a formal education which provide a recognised qualification. For a maximum benefit, this system would resemble the education system in Syria as closely as possible.

Whilst the physical scars of the conflict, on bodies and buildings, are clear to see, the mental scars are not as visible. However, after talking to people in Arsal’s refugee camps for a few moments, the trauma that has turn so many lives upside down becomes apparent. None are more affected by witnessing and experiencing the horrors of conflict than children.

Whilst NGOs provide limited psychosocial support to the refugees, it will take a long time to heal the mental wounds. More support needs to be given to help care for those who are still struggling to cope with the burden of the horrors they have experienced.

Owais Khan, Human Appeal’s Director of Communications, said: “We did not find a single case of a Syrian refugee in Arsal who did not express a desire to return to Syria. Geographically there are very few camps as close to the Syrian border as the ones in Arsal, making it is a fair assumption that the majority of Syrian refugees in Arsal have a desire to return to Syria. However, the reason that they have not is because they fear conditions are not right.

“Human Appeal are working hard to help refugees across the region, providing medical treatment, hygiene and sanitation facilities and food parcels. What the people we spoke to told us is that they just want to go home and rebuild their lives, but for many, the conditions are not right for them to do that yet.”

Read the "Syrians Then and Now" Report