More than two in five of the UK are not aware of the conflict in Yemen, according to a survey commissioned by Human Appeal and conducted by YouGov. The poll, which was carried out between the 16th and 17th October, found that when asked “As far as you are aware, which, if any, of the following countries are currently, or have recently, been involved in ongoing armed conflict?” only 58% selected Yemen from the ten possible options. 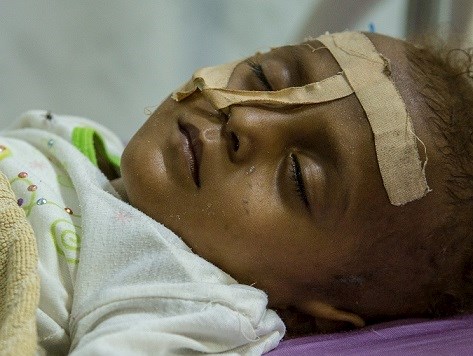 Human Appeal, one of the leading UK NGOs providing aid in Yemen through healthcare projects, access to clean water, food and shelter, has called the findings “startling, considering Yemen is standing on the precipice of a catastrophic famine resulting from the conflict.”

“The Yemen conflict has been raging for three and a half years now, yet two in five people in the UK haven’t heard of it. This compares to 77% of the public who are aware of the conflict in Syria and 63% who are aware of the situation in Afghanistan. This could be due to the UK public being less likely to consume news relating to foreign affairs and that comparatively the Yemen conflict hasn’t received much coverage, especially compared to Syria, or that the conflict is complex and it isn’t played out like a Hollywood movie where you have clear sense of who are the good guys and bad guys.

“This lack of awareness is particularly starling, considering Yemen is standing on the precipice of a catastrophic famine resulting from the conflict. 17.8 million people are food insecure, meaning six out of every ten Yemenis do not know where their next meal will come from. Food insecurity is likely to get worse, and most conflict affected areas - particularly the south and west coast - are likely to fall into a state of famine if food access does not improve. The UN has said that 14 million people are at risk of starvation, further compounded by imports of both humanitarian and commercial goods continue to be restricted by both conflicting parties.

“The human price being paid every day, across Yemen, is horrendous and we feel like more of the UK should be aware of the realities in a conflict zone where violence and poverty reigns unabated in a disastrous cycle. 75% of the people in Yemen are in need of humanitarian assistance. Yemen’s public health system has been crippled by last year’s cholera and diphtheria outbreaks, with only half of all hospitals in the country still functioning and those that are still open are struggling to access medicines. More and more Yemenis are struggling to access clean water and hygiene facilities, allowing disease and infections to spread rapidly. Despite all of this, Yemen is being ignored.“

Human Appeal has been present in Yemen since 2014 and has been running programs to alleviate the suffering of conflict affected and most vulnerable populations. This year alone, Human Appeal has helped over 165,000 Yemenis through life saving support provision in health (including Cholera response), nutrition, WASH, food security, shelter, protection and education interventions in the most affected areas across the country. Human Appeal also runs an Orphan support program in Yemen, which provides monitory support to conflicted orphan children. Human Appeal is an active member of the humanitarian coordination mechanism in Yemen and effectively participates in the UN clusters and other coordination forums and has support of government, its agencies and departments. Human Appeal has recently signed agreements with UN agencies totalling over $4 million. The interventions include implementing an emergency health and nutrition response through the provision of health services including obstetric care, mass casualty and trauma management in affected areas, and an emergency food security project for vulnerable people through the provision of unconditional cash transfers. These two projects alone will help over 450,000 Yemenis.

In March 2018 Human Appeal released a report detailing how hunger is being used as a deliberate weapon of war in Yemen and Syria, the report can be found here.

Human Appeal representatives from Yemen and the headquarters in Cheadle, Greater Manchester, are available for interview. Please contact Charles Lawley on press@humanappeal.org.uk or call 07535 415 060

For images of Human Appeal’s work in Yemen please see this gallery.

Total sample size for the poll was 2093 adults. Fieldwork was undertaken between 16th - 17th October 2018. The survey was carried out online. The figures have been weighted and are representative of all UK adults (aged 18+). People were asked “On a different topic...For the following question, by "ongoing armed conflict", we mean a war either internally, or with another country, where there have been more than 200 deaths in the last 12 months (i.e. since October 2017). As far as you are aware, which, if any, of the following countries are currently, or have recently, been involved in ongoing armed conflict? (Please select all that apply)”