On Sunday 6th November, Saudi Arabia tightened the air, land and sea blockade of Yemen, after Houthi rebels fired a ballistic missile towards the Saudi capital of Riyadh. United Nations agencies have issued an urgent appeal for the blockade to be fully lifted, warning that ‘untold thousands’ will die if fresh supplies are not able to enter the country.

In early November, 22 humanitarian groups issued a warning that Yemen only had 6 weeks of food left to feed the 7 million Yemenis facing famine-like conditions. Nearly a month on, the situation is even more desperate.

There are currently more than 3.3 million acutely malnourished children and pregnant and lactating women in Yemen. This includes 462,000 children under 5 suffering from severe acute malnutrition. Mothers who are starving cannot make breast milk for their children. Stunted and wizened babies, the shape of their tiny skulls clearly visible through greyish skin, are often too weak even to cry out for food.

Prices of food and fuel have risen sharply as a result of the tightened blockade, pushing an additional 2.3 million people into food insecurity.

A humanitarian crisis of epic proportions

The conflict in Yemen has been ongoing since 2015. 10,000 people are believed to have been killed and 3 million displaced from their homes during this time. It has left 20.7 million people in desperate need of humanitarian aid and created the world’s largest food security emergency.

Air strikes have destroyed essential infrastructure including water pipelines, cutting off clean water supplies and leaving families with no choice but to drink contaminated water. Uncollected rubbish and dirty drinking water have caused a major cholera outbreak, sickening 959,810 people and killing more than 2,200 since April 2017. 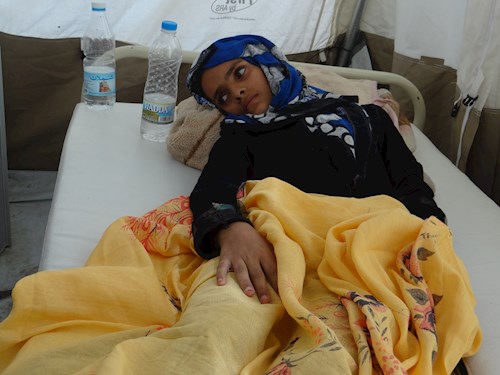 The international Committee of the Red Cross estimates that 2.5 million people in Yemen’s cities have no access to clean water, making it likely that the cholera epidemic will continue to spread.

With another harsh winter on its way, the people of Yemen face even greater suffering. Without emergency supplies of food, clean water and warm clothing, thousands could die every single day.

£165 will support a family with nutritious food and other winter survival essentials. For £250, you can provide a refugee household with plastic sheets to keep out the rain and snow. Just £100 will keep a family warm with winter clothing, blankets and heating and £65 will feed a family of four for a whole month.