Malnutrition: the grim reality for many of India’s children

Despite several major programmes conceived to tackle the issue, malnutrition remains a serious problem in India. Recent data from the Global Hunger Index 2016 shows that 1 in 3 Indian children have stunted growth due to lack of food, and around 15% of the country is undernourished.

India is the world’s most populous democracy, home to more than 1.2 billion people and a place of huge social, cultural and economic diversity. It ranks 97th out of 118 countries on the Global Hunger Index and the World Food Programme (WFP) states that a quarter of all undernourished people worldwide live in India.

Anaemia and stunting in Indian children

Anaemia is a common problem, with more than 58% of children under 5 suffering from insufficient levels of haemoglobin in their blood, according to a family health survey of 600,000 households. Anaemia causes exhaustion and vulnerability to infections. It can also have a negative impact on healthy brain development in children.

The 2015-16 study of 600,000 households also revealed that 38% of children under 5 were stunted, 36% were underweight and 21% were wasted due to lack of nutrition. More than half of all pregnant women surveyed were also anaemic, something that will have a poor effect on their newborn children. Since the last similar survey, undertaken in 2005-06, internally accepted markers of children’s health do show some improvement, but the levels of undernourishment remain high. 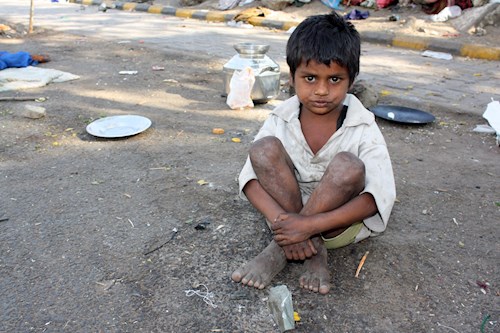 Malnutrition in India’s children is caused by high levels of poverty. According to the World Bank, 80% of India’s poor live in rural areas and casual labour is their main source of income. 1 in 5 Indians are currently living in poverty and perhaps none are as vulnerable as India’s orphaned children.

Children who have lost one or both parents are classified as ‘single’ and ‘double’ orphans respectively. They are likely to be out of education and will struggle to access nutritious food, clean water and medical care, particularly in poverty-stricken rural areas.

Through our Little Human Appeal programme, we need our donors to sponsor Indian children who have become orphaned. Just £25 a month can provide an innocent girl or boy with clothing, enough food to eat and medicine if they become poorly. It also guarantees your orphan access to education – something that will allow children to transcend poverty and enjoy a secure future.