Tuesday 15th March marked five years since the start of the Syrian conflict, to mark this date, Human Appeal and our partner charity Mosaic Network (who were founded by HRH The Prince of Wales) held an event at the House of Lords, hosted by Baroness Warsi.

We invited parliamentarians, leading charity figures and members of press to discuss the realities of life on the ground in Syria, what is needed their and the surrounding region and to keep the topic on the public agenda, even after five years.

As well as Baroness Warsi, the speakers included Shadow Secretary of State for International Development Diane Abbott MP, former Secretary of State for International Development Andrew Mitchell MP, Dr Rouba Mhaissen from Sawa for Development and Aid, Greg Barrow from the United Nation’s World Food Programme, Simon O’Connell from Mercy Corps, Dr Hany El-Banna from the Muslim Charities Forum and our own CEO Othman Moqbel. The event was chaired by Aaqil Ahmed, the BBC’s Head Of Religion and Ethics.

Here is the speech Human Appeal CEO, Othman Moqbel, delivered to those in attendance at the House of Lords:

“I want to begin by thanking our host Baroness Warsi, who has been an avid supporter of our work, and a strong advocate for the Syrians….

It is a tragedy that we have had to gather yet again to mark the 5th year of the horrific atrocities millions of Syrians continue to face. But to see you all here taking time out of your busy schedules gives me renewed hope that there is still a determination to continue the efforts for the people of Syria. 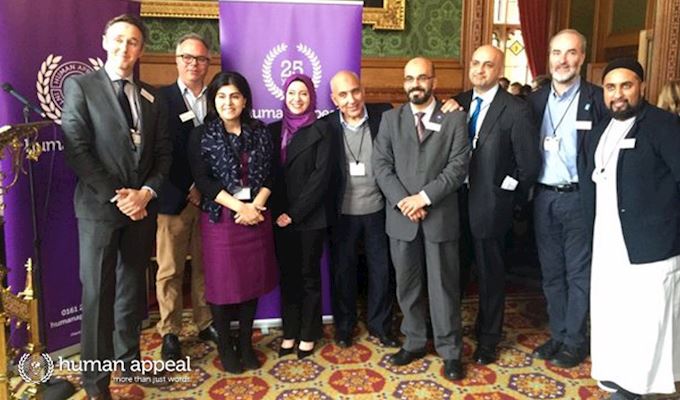 Human Appeal has been working in Syria since the conflict there began; we were one of the first NGOs on the ground.

From delivering food, clothing and medical supplies to building hospitals, one thing Human Appeal has become known for is its distribution of flour for bread to the entire northern region of Syria.

You would think, by watching the news, that every single Syrian has escaped to European shores. However, just seven a half percent of the people displaced by this conflict have applied for asylum in Europe.

In Lebanon, a country the size of Cornwall, it is 1 in 3 people are refugees. Lebanon’s contribution is the equivalent of the UK taking 20 million refugees.

Turkey is home to 2.7million refugees. Turkey have taken in more refugees than any other country in the world, three times as many as all of Europe combined, and let us not forget that Germany has taken the lion’s share of refugees. Turkey houses the equivalent of the entire population of the West Midlands, in refugees.
These generous countries deserve our commendations and applause

More needs to be done to support refugee camps in these countries, otherwise more Syrian refugees will risk the journey to Europe. More support needs to go to organisations with links to local NGOs – they have been shown to be most effective in delivering aid.

Pledges don’t materialise quickly enough – £2 billion has been pledged to Syria, but this might take 8-9 years to materialise. But things develop so fast that these pledges needs to be monetarized and dispersed quicker

If this does not happen, the professionals and skilled workers, who will be needed to repair Syria once this conflict is over, will have already fled. These people are qualified enough to easily make a new life elsewhere. A stable Syria in a state of peace will be all the poorer for losing its engineers, its lawyers, its doctors.

But what of the professionals, like doctors, who do stay?

You’ll have read and seen the Daily Mail and on the ITN news our exclusive reports about the unprecedented danger our aid workers face, and I’d like to take a moment to acknowledge and commend the thousands of brave aid workers risking their lives to serve the desperately needy.

One of the many things Human Appeal does to help in Syria, is provide extra training and medical equipment to doctors. Last November some of our doctors from Birmingham conducted anaesthetic training for doctors working in Syria. One of the doctors we trained was Dr Emad Alnesr.

Last month Dr Emad Alnesr was killed when airstrikes, allegedly by Russian forces, hit one of the hospitals he was working in. It was one of the five hospitals and two schools struck by bombs in a single day in Syria.

It is a disgusting irony that doctors, who spend their time fighting death on the ground, can die when death rains down onto them from the skies. Dr Emad Alnesr lost his life helping others fight for theirs. Doctors like Dr Emad, was no threat to a fighter jet. The hospital he was in, full of sick people and new born babies, was not a legitimate military target.

A school full of children is not a legitimate military target.

People attempting to get on with their day-to-day lives are not legitimate military targets.
If peace cannot be achieved soon, then more needs to be done to ensure international law is respected by the forces fighting in this conflict.

Some cities are starving to death, other cities are being levelled into dust by bombs.

So what do I suggest we do about that? Three things need to happen:

This year, Human Appeal marks 25 years of providing aid to those who need it most. A shining example of the thriving British Muslim charity sector, we are proud of our British values.

Our effectiveness has been endorsed by various UN agencies, who have engaged us to deliver aid for them. As a Muslim charity in Syria, who works in cooperation with locals on the ground, we can deliver food to places where many other charities cannot tread, we can provide life-saving medical assistance in places where lives are being lost and we can bring an education and future to children in places where hope is fleeting.

NGOs like Human Appeal, will never give up on the people of Syria I beg you not to either.”