How to Make Du'a

The Prophet (PBUH) advised us beautifully when he said:

“Du’a is the essence of worship” (Al- Tirmidhi).

Supplication is one of the most fundamental components of our faith because it is how we connect with Allah. All of our actions for the sake of Allah are supplication to Him, in the hope that He accepts and rewards us, as dependants of Ar Razaq, The Provider. One of the conditions of du’a, is maintaining a high opinion of Allah while supplicating, in order for it to be accepted. 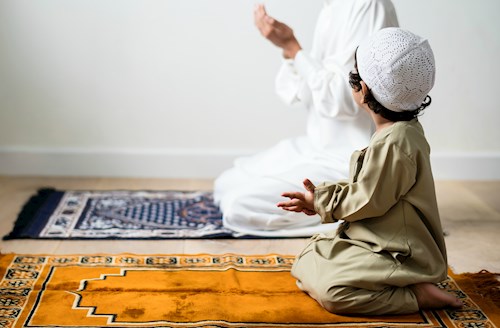 And when My servants ask you concerning Me, then surely I am very near; I answer the prayer of the suppliant when he calls on Me, so they should answer My call and believe in Me that they may walk in the right way. (2:186)

The Prophet (PBUH) counselled us on performing du’a; here are a few pointers to help improve your du’a etiquette.

1. Start off with prayers for the Prophet Muhammad (PBUH):

The Messenger said, “Every du’a is kept back until you send blessings upon the Prophet.”

3. Praise Allah as He deserves.

‘Umar (ra) narrated, “..then the Prophet (PBUH) turned to face the qiblah, then he stretched forth his hands and started to cry out to his Lord”

5. Raise your hands into the position of making du’a.

6. Have faith that your du’a will be accepted and Allah will respond to it.

The Prophet (peace and blessings of Allah be upon him) said: “O worshipper, ask and you will be answered.” (Tirmidhi)

Ask frequently – don’t lose hope. Remember, Allah’s power is unequalled and unlimited, so do not restrict yourself when asking Him for something.

8. Be clear in your supplication - i.e. don’t say “Allah forgive me if you wish”, rather, beg Allah for exactly what you wish to be forgiven for.

1. Ask Allah for exactly what you want. Talk to Allah like you’re having a conversation with Him. Describe to Him what’s on your mind. Tell Him how you feel. Be very precise in your du’a. Reflect upon your life and channel your wishes into du’a. This will help you gain a deeper clarity in life in general.

The Prophet (peace and blessings of Allah be upon him) said: “Call upon Allah when you are certain of a response, and remember that Allah will not answer a du’a that comes from a negligent and heedless heart.” (Al-Tirmidhi)

2. When making du’a for all the Muslims around the world, don’t just end it at “Allah help all the Muslims.” Rather, be specific, describe to Allah what's going on. For example, ask Him specifically to help Syrians, Gazans, Yemenis or Rohingya communities enduring violence or oppression. For that, you'll need to be aware of what’s happening to the Ummah around the world. Do your research, stay aware, and make du’a for them all.

3. Sometimes when we make du’a, we run out of things to say and so we say ‘ameen’ and end our du’a quickly. However, don’t give up, when you face that silence in your du’a, stay as you are, you'll eventually think of many more things to pray for.

4. Lastly, finish your du’a off with salutations upon the Prophet (PBUH).

The Prophet Muhammad (PBUH) said: “The slave will receive a response so long as his du’a does not involve sin or severing of family ties, and so long as he is not hasty.” It was said, “What does being hasty mean?” He said: “When he says, ‘I made du’a and I made du’a, and I have not seen any response,’ and he gets frustrated and stops making du’a.” (Bukhari)

May Allah allow us to excel in our supplications, may He make them a means to draw closer to His Mercy and may we gain clarity and a deeper consciousness through our prayers.