Syrian mother Naheera is in a desperate situation. She’s all alone in a refugee camp in Jordan, with no money and no way of providing for her five children. She worries that her family won’t survive the winter.

Her mother, brother, cousin and son were murdered by being doused in petrol and set alight. Soon after this tragic event, airstrikes began to destroy Naheera’s neighbourhood. She knew that she needed to take her husband and five remaining children to safety. They fled from Syria to Jordan, but they didn’t leave quickly enough.

Naheera’s husband developed a serious lung infection, caused by chemicals released in the airstrikes. As refugees in a strange country, they couldn’t afford medical treatment for him. Sadly, Naheera’s husband died. 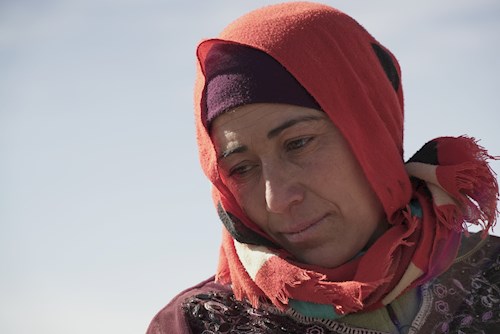 Naheera and her children are all alone

Naheera and her five little ones live in the Mafraq refugee camp in Jordan, in makeshift shelter constructed from pieces of corrugated iron and tarpaulin. This shelter doesn’t keep out the winter chill and snow and rain leak in through holes in the roof. She has to be both mother and father to her children now.

She says: “When my husband passed away, I looked at my children and realised they have no one but God now.”

Hungry and cold during the toughest months of the year

Naheera’s children ask every day if there will be some meat to eat, because they were used to a more varied and nutritious diet back in Syria. However, here in Jordan, Naheera can’t afford any meat at all. She knows that their diet isn’t good enough, but as a widow, there’s nothing she can do.

All five of Naheera’s children become poorly in the winter months as colds and flu spread through the refugee camp. For young children whose immune systems are already compromised by a lack of nourishing food, flu can be fatal. Naheera is terrified that the cold weather will mean that she loses another precious child.

The worst thing about Naheera’s story is that it is far from unique. Hundreds of thousands of displaced and refugee families around the world are facing a terrible crisis this winter. Poverty and conflict have driven them from their homes and stripped them of the tools they need to survive. For vulnerable families, the cold weather can make their harsh living conditions truly unbearable.

Naheera and her five innocent children are in desperate need of food, warm clothes and fuel to heat their inadequate shelter. Without immediate intervention, this broken family may not survive the winter months.

For just £65, you can give a family like Naheera’s the gift of nutritious food and provide them with enough meals for a whole month.

For £165, you can give the gift of warmth, providing winter clothes, blankets and heating fuel so that small children and their parents can stay safe from frostbite and pneumonia.

For £250, you can give the gift of shelter and keep a vulnerable family warm, dry and protected from the bitter winter weather.